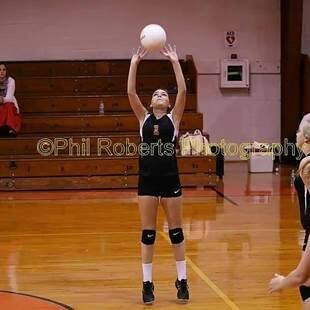 Each week during the high school sports season the High School Sports Examiner and Eastern Maine Sports will announce a female and male athlete of the week. You can send your nominations to Marc at easternmainesports@gmail.com. When you send your nominations include the athlete, name of the school, stats for the week of the nomination. Here is a full list of past winners.

A total of seven Rowell’s Garage female nominations came in this week. Ciara Schoppee has helped the Machias Bulldogs volleyball team reach the top of the class B standings. Schoppee is the fourth student/athlete from Machias high school to earn athlete of the week honors. She joins Logan Wood, Tate Dolley, and Kate Whitney. Wood was named athlete of the week three times, while Dolley and Whitney each won twice.

Other nominations include Amy Hallett and Ryley Buck from the 13-0 Penobscot Valley high school Howlers girls soccer team. Addie Williams had a big game to lift the Maine Central Institute Huskies to a big win and to the number two seed in the final class C standings. Kolby Kain and the Dexter Tigers had a strong finish to the regular season and finished as the number one seed in class C. Sydney Allen (Central soccer) and Corinne Saucier (Old Town field hockey)were also nominated.

Ciara Schoppee – Machias – volleyball- the senior is the setter for the number one Bulldogs. They are 12 – 1 for the season with Schoppee being the leader for assists in class B for the season. She is currently at 237 season assists, well above 2nd place at 126. For the week of October 5th in 4 games Schoppee had 65 Assists, 44 successful serves, 18 aces, 4 kills and 5 digs to help keep her team in 1st place.

Amy Hallett- PVHS- scored seven goals in 16-2 win over PCHS. Scored two goals in a 4-0 win over Lee Academy. Recorded one goal and two assists in 5-2 win over Bangor Christian.

Ryley Buck- scored four goals in 16-2 win over PCHS. Scored on goal in a 4-0 win over Lee Academy. Scored two goals in 5-2 win over Bangor Christian.

Kolby Kain- Dexter- field hockey- scored four goals and had two assists in 7-0 win over Stearns. Scored one goal and had one assist in 4-1 win over PCHS.