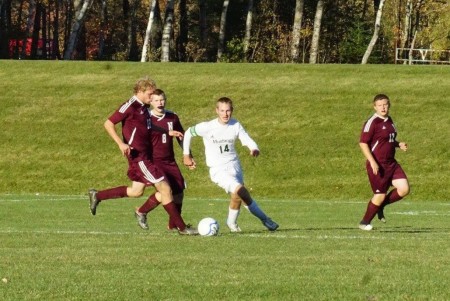 Carter Ward had a huge game in leading the Mattanawcook Lynx football team to a comeback victory over Orono in the regular season finale. The win clinched the Lynx the number two seed and a quarterfinal bye in the class D north playoffs.

Zach Randall from Central, Tyler Welch from Bangor Christian, and Bryce Gilbert from Piscataquis community high school all had big games in leading their team to a win. The Red Devils, Patriots, and Pirates will each play in a quarterfinal game this week.

Down East Limousine male athlete of the week

Mike Hustus- Mount. View- soccer- scored four goals and had two assists in 7-0 win over Nokomis. Hustus joins Stephen Davis as the only student/athletes from Mount View to be named athlete of the week.

Carter Ward – Mattanawcook- football- threw for three touchdowns and 122 yards, while rushing for over 50 yards in 30-26 win over Orono.