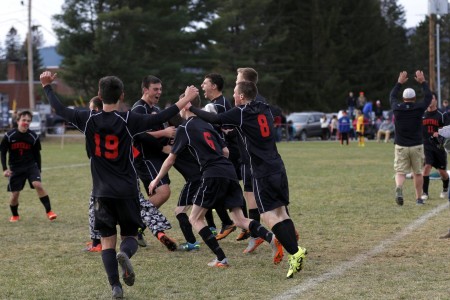 The third seeded Red Devils scored the only goal with just under 29 minutes left in the first half when Caleb Shaw took a pass from Andrew Speed and put it in the back of the net. The defense took care of the rest for Central. The Red Devils will travel to East Machias for a regional final showdown against Washington Academy this Wednesday.

“I just saw (Andrew) Speed beat his man on the outside and tried to keep pace with him and anticipate the cross and when he crossed it, the ball went through the whole defense and I was all alone on the backside and just one timed it in,”Shaw said. “This was really important for the team because at the beginning of the game we said we wanted to come out and get an early goal and it was very important for us to get an early lead. I think the early goal really helped the momentum of our team a set a tone for the entire game! Our D stepped up big this game and held a very good offensive team scoreless.”

That defense is led by Trevor Macomber and Grant Poulin in front of Grant’s younger brother freshman goalie Gage Poulin, who had 12 saves on 17 shots. The Red Devils also shutout Houlton in their quarterfinal win. Central lost to Orono in the regional final game last season. They defeated Washington Academy in The semifinals last year.

“It’s very exciting, the way the team has come together in the last few weeks is amazing… After loosing 5 seniors last year, we had to rebuild our whole defense, and it has stepped up, when you give up no goals in a game, you’re pretty destined to win the game. Going back (to the regional final) this year is very exciting, but this year we hope to go to one more game after this one, we can do it, and we know we can, “Grant Poulin said. “Being a brother of a freshman makes me pretty proud, he (Gage Poulin) has come along way through the season, and our two shutout playoff games in the playoffs this year have been a mixture of strong defense and Gage playing very well in net. Fort Kent was a great offensive team and we knew that our defense was going to have to be on point and same as Gage’s game in net.”

With the Red Devils holding a lead, coach Paul Speed decided to focus on defense in the second half against the solid Warriors offense.

“We played a very good first half with the play being 50/50 for each team. The second half we decided to drop one forward to midfield in hopes to slow down the offensive attack of Fort Kent,”coach Speed said. “We gave up some offensebut in the end it was the right decision as they (Fort Kent) had several chances to score but we were able to clear most balls from our goal area. The last ten to fifteen minutes of the game was exciting and the boys gave everything they could to defend the goal. Gage Poulin made several key saves throughout the game.”

The Red Devils know that it will not be easy facing the best team in class C north during the regular season. Washinghton Academy (16-0) has outscored opponents 97-4.

“Our matchup with WA will be a rematch of last years semifinal, where we pulled out a 2-1 overtime victory. This year WA appears deeper across the board with a very solid defense giving up four goals in 16 games so far. They also have several skilled players at midfield and forward who pass the ball to space very well and can put shots from most anywhere on the offensive half of the field. We will need to find a way to possess the ball offensively to keep the ball from their sweeper Jordan Lambe and capitalize on the chances that do come,”coach Speed said. “Defensively we need to stay together as a unit and defend the thru balls and the ball reversals to slow down their speed and skill as well. We cannot give them fouls on our defensive side of the field to be able to setup plays as they do a job good with pressuring the box on these free kicks. It will take a complete 80 minute effort to beat WA but the boys are excited for the opportunity to be in the class C regional final again this year.”

Grant Poulin added, “the matchup against WA is a tough one, they’re defense is top knotch, and they’ve had a strong playoff run thus far. Last year was a tough game, with us coming out on top in overtime. We know the field, we know their style, but you still have to execute during the game.”

Andrew Prescott, Zachary Randall, Grant Poulin, Shaw, and Speed are captains of a Red Devils team that has gone 15-1 and scored exactly 100 goals.