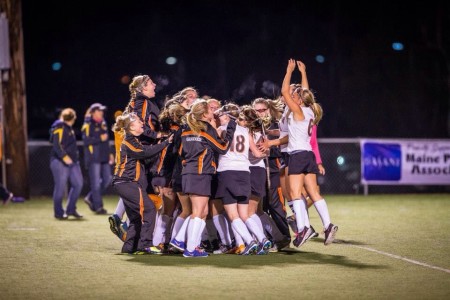 It seems like it just started, but the 2015 field hockey regular season will come to an end in just six days. Some teams will be playing for playoff position right until that final day on Wednesday, October 14th.

One of those games will take place in Old Town, when the Coyotes host the Foxcroft Ponies. The Coyotes have nine wins and are currently sixth in the Maine Principals’ Assocation class B north standings. Foxcroft fell to Dexter 2-0 on Wednesday. It was the first loss of the season for the Ponies. They currently have 11 wins and are second in the class B standings. Foxcroft will play their final home game against Orono on Saturday. The Ponies could finish anywhere from first and fifth.

Winslow has the slight edge at the top of the class B standings. The Black Raiders will finish their regular season against Morse and Camden Hills. Belfast and Gardiner are both 10-2. They will meet this afternoon, the winner will lock up a top three spot and have a shot of finishing in the top two. Lawrence is fifth in the standings and will finish the regular season against Spruce Mountain.

In class C, MCI is at the top of the standings, the Huskies have two heal point worthy games, as they take on Nokomis, and end the regular season against current second seed Mt. View. It looks like the Mustangs will need a win over MCI to lock down a top two seed. Dexter has had an up and down week. It started with a loss at Guilford against PCHS, followed by a win over the Ponies. Dexter has games against Mattanawcook, PCHS, and Stearns left on the schedule. A strong finish will give the Tigers a good opportunity for a top two seed, and with some help a chance for the top spot in class C. Winthrop is fourth and only has one game remaining on the schedule. PCHS is sitting in The fifth spot, with four games remaining, including two heal point worthy games against Old Town and Dexter.

In class A, top seeded Messalonskee will end the regular season against number three Cony and second seed Skowhegan. Messalonskee handed Skowhegan a rare loss earlier in the season.
Messalonskee, Skowhegan, Cony, and Mt.Blue look locked in to host a quarterfinal game. Edward Little, Oxford Hills, and Hampden will play on the road in the quarterfinal round. The final class A tournament spot in class A is still up for grabs. Mt. Ararat and Brewer are very close in the current MPA standings. Brunswick finishes the season with games against Brewer and Mt. Ararat. If the Dragons win both, they could grab the final spot.