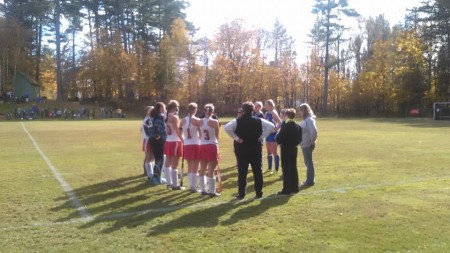 Dexter and PCHS meet before their semifinal game at Dexter high school.

DEXTER— The Dexter Tigers field hockey team is used to playing deep into October. This year will be no different. Kolby Kain and Katie Batron each had one goal and one assist in the first 6:52, as the Tigers rolled to a 3-0 semifinal victory over Piscataquis community high school (PCHS) on Saturday afternoon. Dexter will take on Maine Central Institute (MCI) in the class C north regional final on Tuesday. Addie Williams recorded a hat trick in the first 10 minutes of the game in a 3-1 Huskies semifinal victory over Mt. View. It will be the eighth regional final appearance in the last 10 years for the Tigers.

The first goal came 2:05 into the contest when Batron made a beautiful pass to Kain, who put it past PCHS outstanding junior goalie Sydney Marden.

“I knew that we had to get it on the other side of the goal, because they were crowding the right side,”Batron said. “So I crossed it over to Kolby (Kain).”

Kain set up Batron for the second goal with 23:08 remaining in the first half.

“We knew that there goalie was really good, we had to get it to the post and tap it in,”Kain said.”That is what we did.”

Dexter dominated the score early on, and they dominated by having possession of the ball for the majority of the early going. The Tigers outshot PCHS 9-3 in the first half, including 7-0 in the first 10 minutes of play.

The Tigers have won six straight since falling to PCHS 3-1 on October 5th. Dexter has outscored opponents 18-0 during that streak. The six game winning streak is great, but the Tigers are hoping to get a chance to end the season on an eight game streak.

“Sometimes the best thing is a loss. I feel the most important winning streak is the last four (in the playoffs) at the end,”Dexter coach Margaret Veazie said. “A loss during the regular season isn’t as important, as long as they are learning from what happened. You want them to be peaking st the end. This group is in shape more than last year. That was one of my focuses, I felt that I didn’t do a good job at that last year.”

Dexter (14-2) has outscored their opponents 53-7 this season, including 51-2 in their 14 victories. Veazie credits having her daughter Kristy Stsples back on the coaching staff as a key for the improved defensive play. Staples returned after a brief stint as head coach at Nokomis.

Veazie said, “having Kristy (Staples) back has been huge. Our defense is so much better with her.”